When you are looking for 55-Inch basic 4K UHD TV, you can find UN55KU6300 and UN55JU6400 from Samsung. Those two options come from different lineup year, Samsung UN55KU6300 is introduced as part of Samsung’s 2016 TV lineup, while Samsung UN65JU6400 is part of the older 2015 TV lineup. We can call them as the new and older model although We can’t call them direct successor-predecessor model. I’m quite sure that you are eager to know what’s improved on the new model if you are interested in those two TVs as your alternative choice. Let’s talk about that on this article.

Samsung UN55KU6300 is the basic 55-Inch 4K LED TV from Samsung’s 2016 TV lineup that introduced as part of KU6300 model. Samsung UN55KU6300 comes with UHD Dimming that combined with UHD Upscaling as its main picture technology. UHD Dimming deliver accurate details from both original 4K content sources or HD contents that upscaled into near 4K picture quality. For the picture technology, PurColor can be found on Samsung UN55KU6300. With PurColor, Samsung UN55KU6300 is able to deliver lifelike color details by blending primary and secondary colors. For the Smart TV platform, 2016 Samsung Smart TV is installed on Samsung UN55KU6300. It’s still powered by Tizen OS. With Tizen OS, you can enjoy premium entertainment while also run Tizen based Smart Apps on the TV’s big screen. Smart Remote is included with the TV set to help you control the TV and Smart TV platform conveniently.

Samsung UN55KU6300 is one of the bestselling 55-Inch TV in 2016. It’s popular choice for 55-Inch Smart 4K UHD TV. The reason behind that is the TV have a great value. It’s priced at affordable price while can deliver excellent picture quality. Additionally the customers said that the blacks are deep while the colors are vibrant. The TV is also perfect for monitor said other customers. The Smart TV platform is user-friendly and intuitive for most customers and the apps are working fine. Some of the customers are satisfied with the sound while there are few others that’s not satisfied with its volume level and They need additional soundbar for better sound quality. You can read more about the customers’ experience of Samsung UN55KU6300 here… 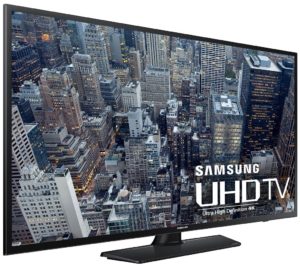 As one of the popular 55-Inch Smart 4K UHD TV from 2015, you can find that most of the customers of Samsung UN55JU6400 are satisfied with their purchase. They said that this TV model is able to deliver great picture at the good price. Some of the customers also shared their best picture setting with this TV model, while They are also satisfied by using the TV as gaming monitor by switching it to game mode. The setup is easy for almost everyone, while the Smart TV platform works quick and powerful said the customers. Most of the customers agree that the sound is quite standard so They recommend to use soundbar for more powerful sound. Do you need to know more about this TV? You may need learn more about Samsung UN55JU6400 from the customers’ perspective on this page…

Any Improvements on the New Model?

We can see the similarities & differences of Samsung UN55KU6300 and UN55JU6500 on the table above. There’re few differences that We can find there. Which of them is improvement? Let’s talk about that.

Should You Order The New Samsung UN55KU6300?

From our discussion above, We can find that Samsung UN55KU6300 comes with better picture, Smart TV platform, remote control, and built-in wifi, while their price are almost similar. So If you are looking for 55-Inch 4K LED TV, It’s no brainer that you should go ahead with the new model that comes with HDR Premium, newer version of Samsung Smart TV, Smart remote control and the faster 802.11ac wireless. Where’s recommended place to order one? You should consider to order Samsung UN55KU6300 here…

As an Amazon Associate I earn from qualifying purchases.