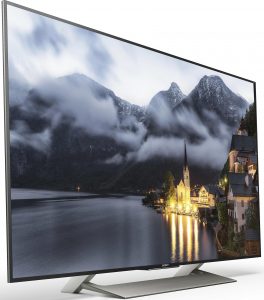 Sony XBR55X900E comes as part of Sony X900E model that introduced in the first quarter of 2017. Sony XBR55X900E comes with 4K UHD resolution that completed with Triluminos display. 4K UHD resolution can deliver brilliant picture quality that powered by 4K X-Reality Pro picture engine that help to deliver accurate details from both original 4K content sources or HD contents that upscaled into near 4K with its integrated 4K upscaler. Triluminos display that installed on the TV screen bring wider color spectrum so that you can get rich color details. Sony XBR55X900E is completed with X-Tended Dynamic Range Pro that deliver expanded contrast. You can enjoy up to four times brightness range with X-Tended Dynamic Range than conventional LED screen. Sony XBR55X900E is completed with 4K HDR that powered by 4K HDR X1 Processor. So you can get better details, color and contrast with more powerful picture processing capability. The Smart TV platform of Sony XBR55X900E is Sony Android TV that can deliver premium entertainment as well as run additional Smart Apps on the TV’s big screen. It’s also completed with Voice Remote Control that make it easier to control the TV and its Smart TV platform. You can check today’s offer of Sony XBR55X900E on Ebay here… 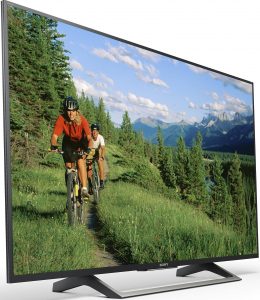 Sony XBR55X800E comes as the largest screen size option of Sony X800E model. Sony X800E is the model that become successor of Sony X800D model that introduced as part of Sony’s 2016 TV lineup.It comes with Triluminos display that deliver accurate color details on the TV screen. The picture engine of Sony XBR55X800E is also 4K X-Reality Pro. 4K X-Reality Pro can bring extraordinary clarity picture from both original 4K content sources or HD contents that upscaled into near 4K quality. Sony XBR55X800E comes with 4K HDR so that It can deliver enhanced color, clarity and contrast from your HDR contents. Sony XBR55X800E is completed with Motionflow XR 240. It indeed basic refresh rate for 55-Inch 4K LED TV but It still can deliver smooth fast motion images for most scenes. Sony XBR55X800E comes with Sony Android TV as its Smart TV platform. It can deliver your favorite contents to your screen as well as running the apps that you want on the TV’s big screen. Voice Remote Control is also included with this TV set to make it easier to look for the contents that you need using Voice Search. 802.11ac wireless is also attached with Sony XBR55X800E to bring fast internet connection for your 4K contents. You can check today’s offer of Sony XBR55X800E on Ebay here…

Why Sony XBR55X900E is the Better Choice for You?

In the other side, if you have more limited budget for your next 55-Inch 4K UHD TV, then you should consider Sony XBR55X800E as your choice. It’s indeed not completed with the top notch picture technology from Sony, but you still can enjoy excellent picture quality with Triluminos Display, 4K X-Reality Pro and 4K HDR as well as watching your favorite contents and running the apps that you need on the TV screen with Sony Android TV and Voice Remote Control. You don’t have to hesitate about ordering one if you have less budget for your next Sony’s 55-Inch 4K UHD TV. Where’s the place to order one? We recommend you to Check Today’s Offer of Sony XBR55X800E on Ebay here…

As an Amazon Associate I earn from qualifying purchases.